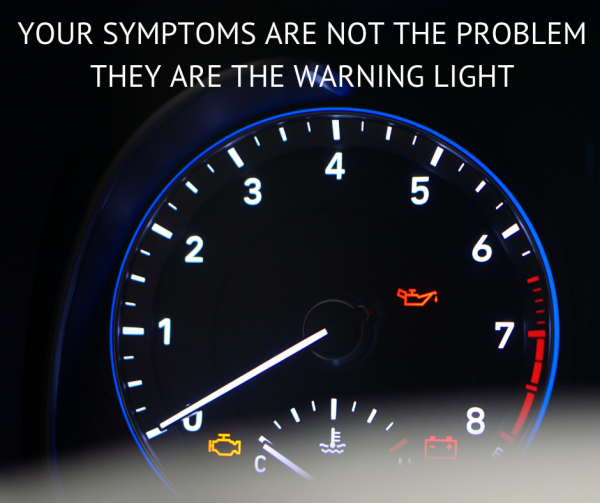 The symptoms of autoimmune disease can be subtle, easily dismissed, and are often compartmentalized. However, your symptoms are not the problem. They are warning signals. There is usually a root-cause that needs uncovering.

On average, it takes a woman 4.6 years to get an autoimmune diagnosis after visiting an average of five doctors. And, to make matters worse, 45% are labeled chronic complainers in the early stages of their autoimmune disease. As a woman, I feel like we are more in tune to our bodies and know intuitively when something isn’t right. However, because we are caretakers by nature, we tend to put ourselves off in order to deal with the demands of daily life. But, you know your body. Pay attention to your symptoms and don’t worry about being labeled a complainer. Even if your symptoms seem minor and annoying, your symptoms matter.

The Earlier, The Better

The symptom you are experiencing is often not the actual problem. Symptoms are signals of problems below the surface that need to be addressed. For example, it isn’t the light on your dashboard that is the problem. The problem that needs addressing is under the hood. The longer you drive around without addressing the problem under the hood, the more damage that is being done. Same with your health, if you have symptoms, the sooner you address the root cause, the less damage is done. Here are three reasons you may not recognize your symptoms as being an autoimmune condition and a way to find the root cause.

Symptoms of autoimmune disease are subtle.

You may think that what you ate for dinner is giving you heartburn. Or, that everybody has gas and passes wind as much as you. Ongoing fatigue is attributed to your workload and a bad night’s sleep. A headache might be blamed on stress at work or not drinking enough water. The allergies you have on the change of seasons. And, although some of those could be true, they might be subtle clues that your immune response is heightened or your gut bacterial balance is off. Your body might be reacting to something it doesn’t like. Ignored over time, symptoms may worsen. You body will compensate, until it cannot, then there will be bigger problems to solve.

Symptoms of autoimmune disease can easily be dismissed.

Vague symptoms can be mistaken for other more minor problems or even mask a bigger issue. For instance:

These symptoms could actually be the first appearing from an autoimmune disease. Unfortunately, they are shrugged off until additional symptoms appear or until they get worse. By the time we are seeing our primary care doctor, there are too many vague symptoms and then they are often dismissed or the dots are not connected.

Symptoms can be completely compartmentalized.

In our current medicine model, we end up going to the specialist in the area we are experiencing symptoms. So, for acid reflux we go to a gastroenterologist. For joint pain, an orthopedic or rheumatologist. For dry eyes, we go to our eye doctor. Instead, consider that all our systems work in conjunction with one another. When we compartmentalize them, we ignore that they are all intertwined systems communicating with one another and that our immune system is control central.

Functional Medicine is a new model of medicine that takes an evidence-based scientific way of looking at disease. It seeks to uncover the root-cause and address it using lifestyle modifications as a first-line of defense. It also utilizes testing, supplements, medications and other therapies. However, Functional Medicine sees the individual as a whole and takes into account nutrition, exercise, sleep, stress, self-care, healthy relationships, meaningful work and life. Health coaching is often a part of their model because these areas can be hard to make changes in alone. But, they are large contributors to our overall health and affect how our genes express themselves. A collection of symptoms indicates a bigger issue. By looking at the symptoms and interconnecting the body systems, finding the common denominator, removing or repairing the problem, the annoying and painful symptoms can resolve and even disappear.

Leaky gut is thought to be a precursor to autoimmune disease. Take my free LEAKY GUT QUIZ. See how your symptoms measure up.

Having various symptoms doesn’t mean you have autoimmune disease. However, there is a reason for your symptoms. Don’t dismiss the warning lights that come on for you. But, don’t be scared of them either. Find the cause and you can work toward fixing the problem before bigger problems arise.

Posted in Blog and tagged autoimmune, symptoms
← 7 Tips for Resisting Sweets7 Thanksgiving Tips So You Don’t Tip the Scale →

The information provided here is for educational purposes only. Always seek the advice of your physician regarding any questions or concerns you have about your specific health situation prior to implementing any ideas presented here. I am not a medical, nutritional, or mental health provider. I serve as a coach who guides and helps you reach your own health goals through implementing incremental, positive, healthy and sustainable lifestyle changes that help you live the life you want to live. Please refer to the website terms, conditions and disclaimer for more information.